As the solar odometer turns

We have a new residential solar electric (PV, photovoltaic) system installed about a month ago, and its "odometer" will soon turn over the 5 in 500 kilowatt-hours (kWh) of electricity generated. 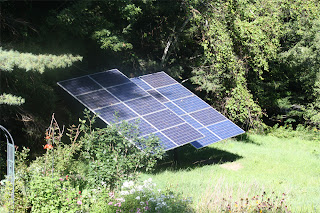 It's pretty impressive, just in a mechanical (or rather, non-mechanical) sense.  It just sits there.  Nothing seems to happen, but the kWh generated daily continues to rise.  No muss, no fuss.  Pretty neat.

But I digress.  The reason for this post was to say something about what 500 kWh will represent, when we get there later today or tomorrow.

In terms of energy, it's the equivalent of 15 gallons of gasoline, or enough to drive one of our hybrid autos about 675 miles.

In terms of generating electricity, the numbers are bigger, because the combustion process for fossil fuels wastes energy.  500 kWh is equivalent to burning about 500 pounds of coal, or 35 gallons of diesel oil (New England, where we are located, still burns plenty of diesel oil to generate electricity).

In terms of carbon dioxide (CO2) emissions, the New England utility system gives off about one pound of CO2 per kilowatt-hour of electricity, so our 500 kWh means about 500 pounds of carbon dioxide has been kept out of the atmosphere.

So what?  Well, that's where the numbers get truly impressive, because of the very long life and heat-trapping effect of carbon dioxide. In a post on his blog, Quark Soup, science journalist David Appell quotes David Archer's book, The Long Thaw: How Humans Are Changing the Next 100,000 Years of Earth's Climate, as follows:

"If we add up the total amount of energy trapped by CO2 from the gallon of gas over its atmospheric lifetime, we find that our gallon of gasoline ultimately traps one hundred billion (100,000,000,000) kilocalories of useless and unwanted greenhouse heat."

Now, I don't know about you, but I don't use kilocalories much on a day-to-day basis, so, how much energy is that?  Using the handy Google converter for units of measure, I find that it is 2 x 10 to the 13th (10e13) joules--still not a very meaningful quantity.  However, one Hiroshima-size atomic bomb releases 63 x 10e12 joules, and one pound of CO2 traps 2 x 10e13 (20 x 10e12) joules.  In other words, just three pounds of CO2 added to the atmosphere, over its lifetime, traps as much heat as released by the Hiroshima bomb (a unit of measure Mr. Appell calls the "hiro").

This in turn means that, in a little over a month, our residential solar system has kept enough CO2 out of the atmosphere to trap the equivalent, over time, of the heat that would be released by 167 Hiroshima bombs.

(It also says a lot about how much heat you're adding, over time, to the climate system with every gallon of gas--about 7 Hiroshima bombs' worth--and why it's silly to claim that the billions of tons of carbon dioxide we're adding to the atmosphere each year have no impact on the climate.  But that's another blog post.)

I expect to use these numbers more in the future, in other posts and in comments on the Internet, so if you find any errors, please let me know (Mr. Appell has made the same offer, and nothing has turned up yet).

UPDATE (Sept. 8, 2012): The odometer now stands at 626 kWh, which means we have passed another minor milestone--the first barrel of oil equivalent (BOE).  Burning a barrel of oil generates about 600 kWh--and produces 940 pounds (almost half a ton) of carbon dioxide.

I saw it on Twitter today, so it must be true: several posts in succession, all from self-avowed defenders of the Constitution, liberty, blah blah, etc., to the effect that the "Antarctic has been warming for 600 years."

Hmm, I thought as I added these individuals to my "disappear" list on TweetDeck (a time- and annoyance-saving strategy that makes their future tweets invisible to me), I wonder what that is all about?

As I continued to comb the Web for global warming items to tweet, I came across an article in an Australian publication, Crikey, titled "Antarctic melt alarm as scientists find 'very unusual' warming."  Mystery solved.

The article's lead paragraph: "Scientists have drilled 364 metres into ice to complete the first ever comprehensive temperature record of the Antarctic Peninsula — and they’ve found evidence of 'very unusual' and dramatic warming over the last century." [emphasis added]

The article goes on to say, indeed, that the peninsula has been warming slowly for 600 years, but takes some pains to explain the reason for concern:

"The research showed that the Peninsula has seen a rapid warming over the past 100 years, but that this has also come on top 600 years of more gradual, natural warming in the region ...

"The leader of the research expedition, Dr Robert Mulvaney from the British Antarctic Survey, said: 'The exceptionally fast warming over the last 100 years came on top of a slower natural climate warming that began around 600 years ago — well before the industrial revolution — so it is possible that we are now seeing the combination of natural and man-made warming in this area.'


"What this means is that climate change is adding significant extra pressure to the Antarctic Peninsula ice sheets that were already seeing some strain from the natural warming in the region." [emphasis added]
Just remove that context and presto, you have a tweet that implies global warming is nothing to worry about, when exactly the opposite is true.
Why now?  Presumably in a transparent and rather desperate attempt to spread a counter to the news that Arctic sea ice melt has hit a new record.
(Disclaimer: I have nothing against the Constitution and liberty--they're great!  But I do wonder sometimes why people act as though they are part of a valiant few who think so.)
Posted by Tom Gray at 3:33 PM No comments:

It's a favorite climate change denier meme: "It's all natural cycles--the climate is always changing."

So, here is one of the things that is new.  A blogger has taken a graphic from a 2011 scientific paper (Kinnard et al) reconstructing the extent of Arctic sea ice for the past 1,450 years and updated it to show actual observations of the last 12 years:

(Minor caveat: This was posted to the Skeptical Science blog and an astute reader pointed out that it is exaggerated slightly--because of the time of year at which measurements were compared, 2012 should actually be about five dashes higher than it is in the graphic.)

I cannot help but note that this is yet another version of the "hockey stick" shape that shows up in many areas of climate research and that results from the speed with which humanity is impacting the Earth's climate (see, e.g., this similar graphic, in reverse, of surface temperatures of Lake Tanganyika over a similar time frame).

Anyone out there think the above graphic looks like a natural cycle?  If so, please send me a small sample of what you are smoking--I'd like to give it a try.

UPDATE 8/26/12: Joe Romm's excellent Climate Progress blog has an article today titled "Why the Arctic sea ice death spiral matters" that includes the graphic above (minus the extension to 2012) and much more.
Posted by Tom Gray at 7:45 AM No comments:

"'7. The Arctic Ocean is projected to become nearly ice-free in summer within this century, likely within the next thirty to forty years.' [It's not hard to find people on the Web, who know what they are talking about, who believe this will happen before 2020.  While 2012 is, at this writing, on a record pace for Arctic sea ice melt, it remains to be seen whether a new ultimate summer low will result.  What we can say, however, is that there has been no recovery from the 2007 summer low, which was sharply lower than the summer lows in previous years going back to 1979 (when measurements began). You can check out sea ice area through this wonderful interactive graphic, which provides data by day and year.  You can "erase" years by clicking on them at the right, and if you erase back to 2007, you will see that the summer low was roughly 3 million square kilometers, almost exactly a whopping 25% below the low of 4 million reached in 2006.]"

While all the results are not in yet, and won't be until the potential melting season ends next month, 2012 has now erased the 2007 lows for Arctic sea ice area.  As of today, the ice area reported in Cryosphere Today graphic linked to above stands at 2.65 million square kilometers, well below the '07 low of 2.92 million.  The Arctic Sea Ice blog, which appears in the blog list on the right side of this page, has very deep coverage of Cryosphere Today and the several other ongoing measurements of sea ice (extent, area, volume, etc.).  All of the groups measuring except one are now reporting new records.

What does this mean to us? Joe Romm explores the question in a blog at Climate Progress (otherwise known as the climate section of ThinkProgress): "In particular, a 2012 Geophysical Research Letters study, “Evidence linking Arctic amplification to extreme weather in mid-latitudes,” finds that the loss of Arctic ice favors “extreme weather events that result from prolonged conditions, such as drought, flooding, cold spells, and heat waves.”
Posted by Tom Gray at 4:27 PM No comments: